WEEZER (THE TEAL ALBUM) IS HERE! 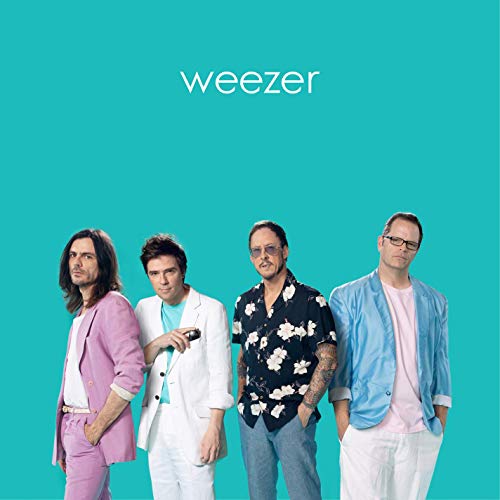 Throughout a sold-out tour of the US in summer 2018, Weezer began working covers into their set, ranging from “Take On Me” by a-ha to “Happy Together” by The Turtles, in addition to their massive cover of “Africa” by Toto, which became a viral sensation upon its release earlier that year (check it out here).  Given the tremendous response to these songs at the shows, the band was inspired to put together a covers album — and thus WEEZER (THE TEAL ALBUM) WAS BORN!

It’s also out today via Crush Music/Atlantic Records.  Click HERE to listen to it. A track listing for the album is below.

2. Everybody Wants to Rule the World (Tears for Fears)

3. Sweet Dreams (Are Made Of This) (The Eurythmics)

5. Happy Together (The Turtles)

Weezer (The Teal Album) precedes the band’s forthcoming new album, Weezer (The Black Album), which will be released on March 1st 2019.  Weezer (The Black Album) was produced by TV On The Radio’s Dave Sitek, with whom the band worked for the first time. The album’s songs were entirely written on piano by frontman Rivers Cuomo for the first time in Weezer history, creating some of the most satisfyingly awesome songs in the entire hits-filled Weezer catalogue.  With band members switching up instruments in the studio, and choruses filtered through Sitek’s own encyclopaedic musical references of everything from Gorillaz to Can to Pink Floyd, Weezer (The Black Album) is the bold next step in the winning streak of acclaimed albums they’ve released since 2014.  The video for the album’s current single, “Can’t Knock The Hustle,” can be viewed here.

As previously announced, Weezer will be returning to the road with Pixies this spring for a run of highly anticipated North American arena dates, including a recently announced headlining stop at New York City’s prestigious Madison Square Garden with special guests TV On The Radio. They will then hit Coachella’s Main Stage before heading to Europe for a number of dates and festivals, including London’s Brixton Academy on June 29th. Tour dates are below.