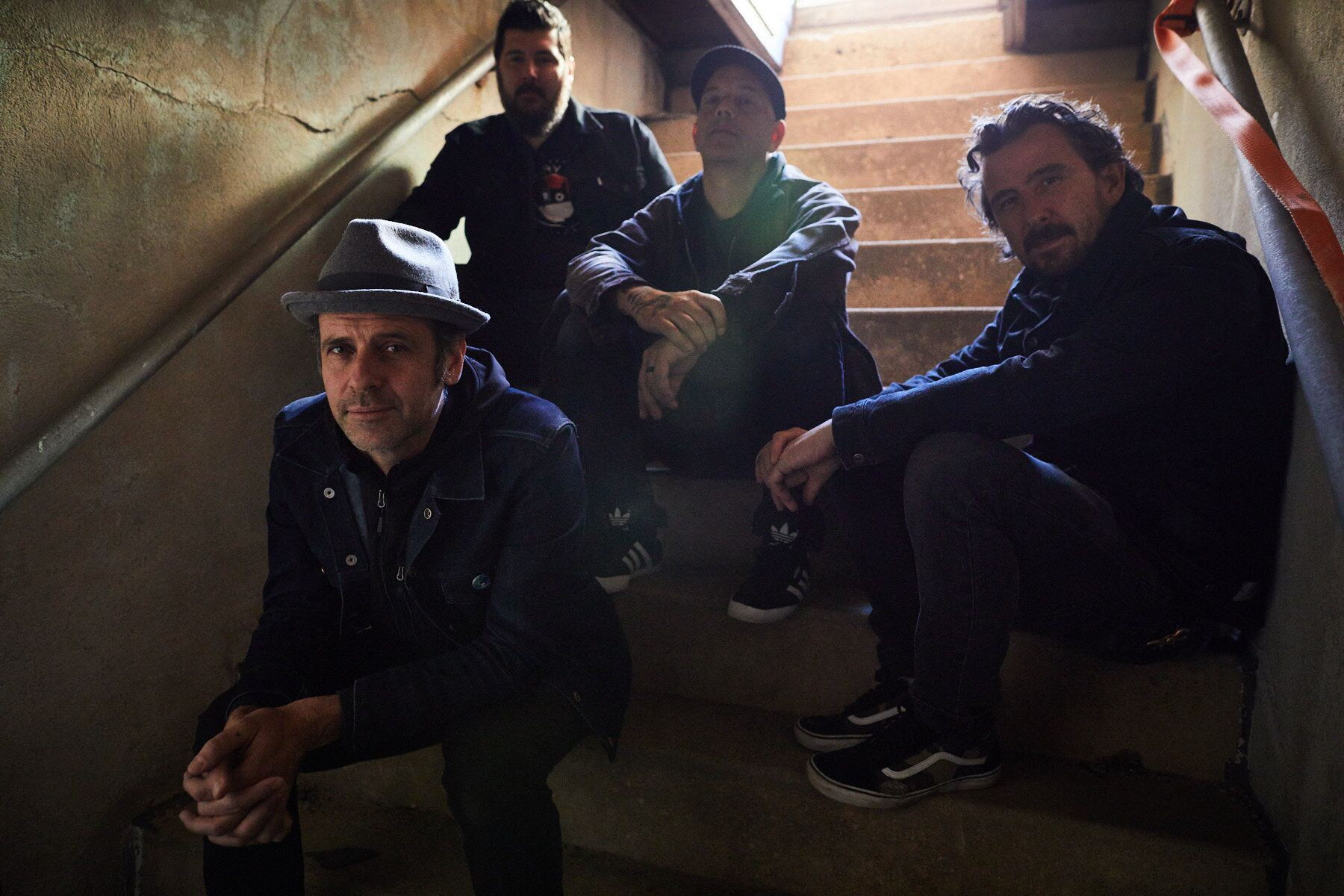 New Jersey’s most beloved punks, The Bouncing Souls, are celebrating their 30th anniversary this year, and to celebrate they’re releasing Crucial Moments, a brand new six-song EP and accompanying book, due out today from Rise Records. Recorded by Will Yip, Crucial Moments captures the sound of a band who are still completely in love with what they do after all these years. The four-piece — vocalist Greg Attonito, guitarist Pete Steinkopf and bassist Bryan Kienlen, who started the band in 1989, and were joined by drummer George Rebelo in 2013 — aren’t ones to rest on their laurels, as Crucial Moments is a wholehearted, fully-realized addition to The Bouncing Souls canon. The EP offers the winning familiarity of the band’s most defining traits bolstered by a long career’s worth of songwriting expertise.

If the Crucial Moments EP shows where The Bouncing Souls are now, the book is a look back at where they’ve been. The collection contains photos, memorabilia, and stories from friends and fans to trace the band’s incredible career and its impact on the people around them. As Attonio puts it, “We’ve made bonds with people around the world that you’d never imagine or dream of when you’re a 17 year old kid from New Jersey in the ’80s. I’m so grateful that I’ve been through that journey and for what I’ve learned, and what I’ve been able to get for my heart and to give, too. I don’t know how I can imagine my life being more gratifying than that.”

The Bouncing Souls will be spending their 30th anniversary with fans all around the world with a massive run of US, UK, and EU tour dates throughout 2019. The shows will feature support from The Bronx, Strike Anywhere, Off With Their Heads, The Casualties, and more.

You can see The Bouncing Souls in the UK at the following dates:

Biography:
It would be easy for The Bouncing Souls to rest on their laurels when celebrating their 30th anniversary. After all, over those past three decades, the New Jersey punks have released ten full-length albums, toured all around the globe, and become one of the most respected bands of their scene. It would have been easy to sling together a selection of their best known work, write a new song or two, and hit the road for a nostalgia tour. But that’s not who the Bouncing Souls are and it’s not who they’ve ever been. Instead the four-piece—vocalist Greg Attonito, guitarist Pete Steinkopf and bassist Bryan Kienlen, who started the band in 1989, and were joined by drummer George Rebelo in 2013—decided to share Crucial Moments with the world. The new six-song EP captures who the band are now, and its accompanying book looks back on who they were and where they came from.

“We all loved how it worked as a 30 year concept,” says Attonito, “Because it encompasses everything— the personal moments that we have with ourselves and how we’ve grown in life, and also the bigger picture where we’ve had these special moments interacting with people who love our music.” The band started collecting what Attonito terms “snapshots” from friends and fans about the role, however large or small, that the Souls had played in their lives. They soon realized that an actual narrative was emerging, one that could trace the impact they’d had over their three decades, cobbled together from all those “crucial moments.”Attonito explains, “One of the conversations we had at the very beginning was to not just make it about us. We’ve talked about ourselves for 30 years – so let’s let everyone else that cares enough tell our story. We wanted it to be primarily fan stories, as well as bands and friends – they know our story because our songs are telling our story. We collected them for over a year and it was such a treat, it’s unreal how meaningful it is.”

Recorded by Will Yip in August of 2018, the six-track Crucial Moments EP captures the same youthful abandon that has defined the Bouncing Souls since their very early days. And this energy shows no signs of diminishing: the EP also showcases a highly experienced band that’s still excited to grow. These songs are a wholehearted, fully-realised part of the Bouncing Souls canon, offering the winning familiarity of the band’s most defining traits and bolstered by a career’s worth of expertise. “Crucial Moments” and “Favorite Everything” are full of the romantic innocence that flows through the bands most wistful and nostalgic songs—that imperative sense that life is something to be experienced right now because if you don’t you may never get another chance.  That’s also true of the chugging lament of “Home”, a slow but defiant anthem that explodes both wistfully and hopefully at the end. Elsewhere, “1989″ is a breakneck, boisterous quasi-hardcore song that, musically at least, could have been written that very year. While the lyrics are a bit more wistful than, say, “I Like Your Mom”, from the band’s 1994’s debut, The Good, The Bad, And The Argyle, it’s clear that despite 30 years of change, this is the same band at heart.

“Really, we’re still the same kids that wrote ‘I Like Your Mom’ and we’ll still crack a mom joke just like we were 17,” laughs Attonito. “But that’s why I value it so much. I’m going to be 50 soon and I don’t see many 50-year-old people around me with that instant bud spirit connection to their oldest friends. What really makes me so proud and appreciative is living all these years and seeing all that we’ve been through since high school – becoming business partners, going on tour 10 months a year, getting girlfriends and having relationships break up, and getting married, and keeping it all going. Having our relationships with each other survive through all those things and all those years is really an achievement.”

You can hear that bond in these six songs and you can relive their journey through the stories and photographs contained in the book. But you can also see and hear that same bond forging forward into the future. Yes, there’s nostalgia here but this is anything but a nostalgia trip. It’s the sound of a band who are still head over heels in love with what they do, who possess the same energy and passion that has always driven them, and who show absolutely no signs of slowing down. “What’s fun is that the creative spark that was happening when we were in high school is still there,” Attonito says. “That, to me, is probably one of the most magical things I have in my life, and now that I’ve lived this long, I see how rare that is for anyone — especially in music. We’ve made bonds with people around the world that you’d never imagine or dream of when you’re a 17 year old kid from New Jersey in the ’80s. There was no internet and there was no chance of making money being in a punk band. It’s hard to explain it to people because the world we live in now is so different. It’s hard to remember how extreme it was then. We’re eons away from that and I’m so grateful that I’ve been through that journey and for what I’ve learned, and what I’ve been able to get for my heart and to give, too. I don’t know how I can imagine my life being more gratifying than that.”